Within cove.tool, users can specify the months, days, and hourly usage of their project with the detailed Occupancy Schedules feature. Before we begin, remember to hit the recalculate button after making changes to schedules. Switching tabs and editing other inputs before saving will erase the changes made to the schedule's table.

Occupancy rates vary from building-to-building, system-to-system, and are meant to best predict energy consumption and expenditure as needed to support occupant activity. Therefore, occupancy rates are one of the factors that most contribute to high energy usage. To better simulate the unique activity for a project, users can input the performance of systems at the two extremes of occupancy (occupied and unoccupied hours), and control the intensity of the system over a time table, as shown above.

What factors are controlled by the schedules feature?

Occupied and unoccupied hour percentages are specifically linked to lighting, appliance, and total occupant hours. Each of these inputs is divided into occupied and unoccupied hour rates. The occupancy rates will be inputted on the right and will be the intensity used for the energy model based on the distribution of hours and percentage of the schedules to the right.

How to use it the schedules time table

Setting the schedule requires the selection of dominant months, days, and hours for the building occupancy.

Let's start with the Unoccupied time periods. These are deselected months that are white. For all days and hours on these deselected months, the occupancy percentage is set to a default of 10%. No other scheduling inputs change the value for these months.

Occupied months are selected and turned blued. Each of the selected months is further broken down into the typical week below.

Occupied Days of the Week 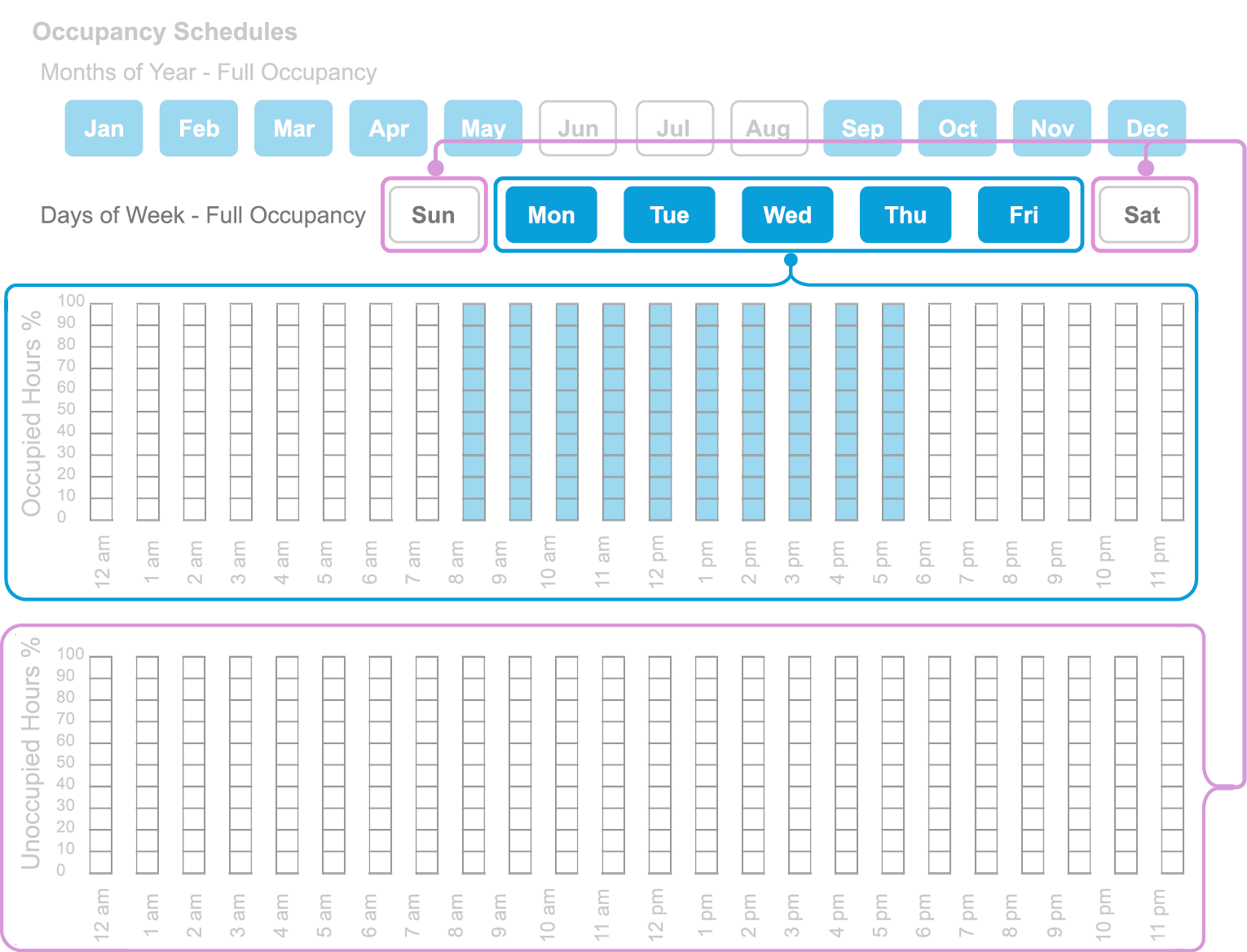 Each hour is broken down into 10% squares that can be selected to be occupied (blue) or left unselected (white). The Total Occupants (occupied) input is used for every blue square as a selected percentage of an hour. The Total Occupants (unoccupied) input is used for every white square. Based on the ratio of blue to white squares for each hour the number of people per hour is calculated. In this way, the user can easily select the percentage of time a building may be occupied while specifying the range of total occupants for the maximum and the minimum number of people inside the building. This can be an excellent energy saving strategy for both new and existing buildings.

For this example, occupied hours will be simulated for January- May and September-December for the workweek of Monday-Friday. The months of June-August are set to 10% total occupancy.

The percentage of occupancy has been adjusted for each hour during the typical workday simulating when people arrive to work, work through the morning, go out for lunch, work through the afternoon, and leave toward the end of the day.

Unoccupied hours will be simulated for the remaining time of the week for Saturday and Sunday during the same months of January-May and September-December. There is less activity during these days and therefore require a separate regular schedule as the function of the building will be different. The inputs work in the same way only simulating more time for unoccupied and set-back values.