All Collections
What is cove.tool?
Getting Started
How much time can I save with cove.tool?

How much time can I save with cove.tool?

This article breaks down the time difference between using cove.tool and alternative Building Performance Simulation tools or typical consultant approach. See how cove.tool can save how to save 220 hours and $44,000 per project if we consider a charge of $200 per hour, the typical consultant fee.

Note: A standard Intel 2.9 GHz i7 with 16 GB of RAM was used to estimate the simulation time of each task.

The average consultant requires many tools, specialized expertise gained over many years in the field, and a hardworking computer running around-the-clock to create a comprehensive building performance report. This process is very time consuming and costly allowing only a few projects to benefit. We aim to improve and simplify these tasks by centralizing them into a single web-based app and automating as many steps as possible. By bringing all the features into one single automated design platform, the software helps designers and engineers drastically increase the efficiency of the building performance analysis.

For this comparison, we will compare cove.tool in 8 typical building analysis activities, and 4 premium work tasks. The categories are inspired by the 2019 AIA publication, Architect's Guide to Building Performance, a digital pdf aimed at curating the necessary knowledge needed for every project to meet the high-performance standards of the 21st century. 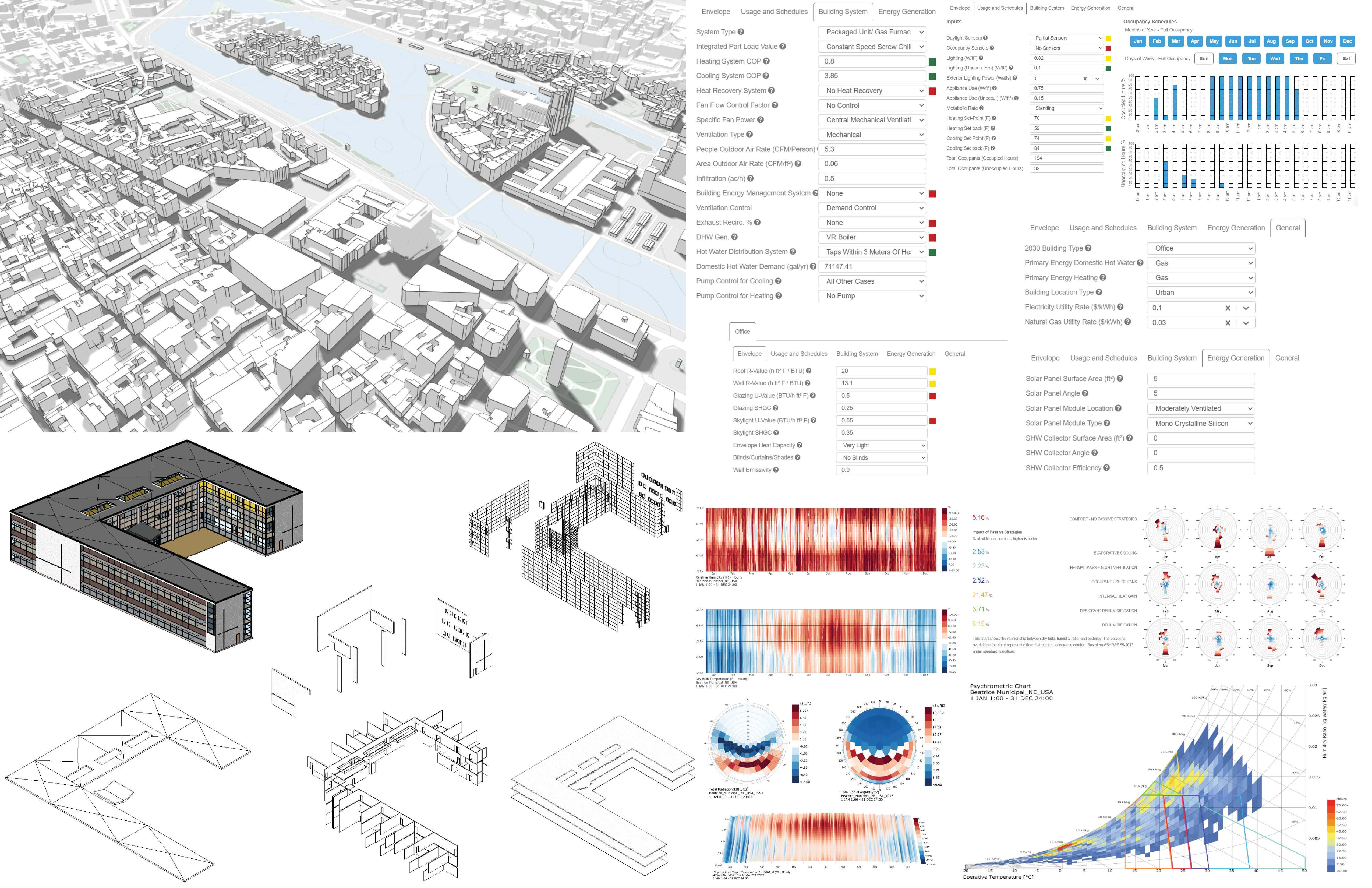 We automate 6 climate studies and dozens of passive design recommendations based on your building location. The Weather Reports are pre-run for every weather file available in the US Department of Energy database. While we automatically create this information with a single building address, it takes hours to create a similar report with other tools. In this comparison, six Climate Diagrams were generated in cove.tool and in another plugin tool (Relative Temperature and Humidity, Radiation by sky segment, Adoptive comfort, Radiation Benefit, Wind Diagrams, and Psychrometric chart.).

We automatically generate context data for approximately 500 meters around the project address through its site context feature. The site context data includes the surrounding buildings (their shape and height), property lines, traffic direction, and public transportation. This feature is not available in other Building Performance Simulation tools and users need to manually model their building context and use local zoning sites to find comparable information. It takes between 2 - 4 hours using Google Maps and our Local GIS site to collect details, and 4 hours to replicate the context map that cove.tool pulls in automatically.

Each of the Building Performance Simulation tools can only work with specific 3D modeling software and requires users to draw a separate simpler geometry for energy modeling purposes. With the help of its various architectural software plugins, cove.tool enables architects and energy modelers to use the model which is already prepared for design purposes and eliminate the need for geometry preparation from the scratch. Users only need to create cove.tool views and hide/unhide elements as necessary and then export them to the web-app.

In addition to the geometrical inputs, systems, internal loads, and operation schedules are other required inputs for energy modeling. The main inputs, such as systems and schedules inputs, are more or less the same in cove.tool and other Building Performance Simulation tools. However, cove.tool has automated the selection of energy codes, best practice engineering inputs, regional cost values, regional building products, envelope related, ventilation related, and lighting-related inputs. Also, it has simplified many of the engineering inputs so they are more understandable to designers. As a result, it takes less time to insert these values into the app. A similar single-zone model requires extensive data retrieval to setup. 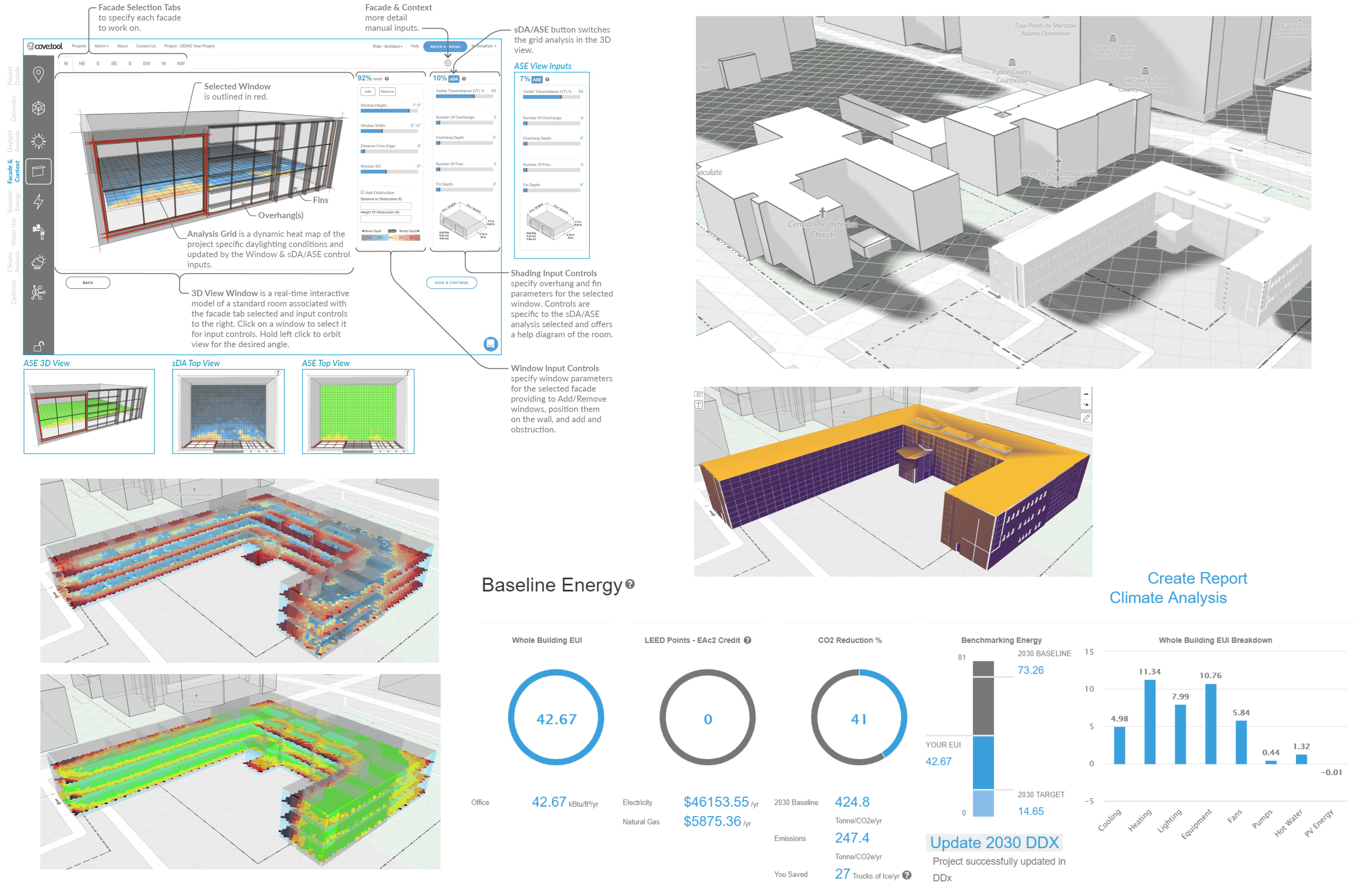 Unlike other AEC applications, cove.tool is a web-based application that runs on a web server which allows for lightning processing speeds via Cloud Computing + Hosting. cove.tool uses a normative energy calculator defined by ISO 13790 and CEN 15603 which has been proven to be accurate to within 2-5% of tools such as EnergyPlus or eQuest and is computationally lighter compared to the these tools. In addition to that, cove.tool relies on a single-zone simulation and uses slightly simpler inputs all of which result in faster processing and simulation time.

Shadow Analysis - The cove.tool site context which is retrieved from OpenStreetMap database to map the surrounding obstructions and achieve more accurate results. Shadow analysis is available by many environmental performance analysis tools. However, while it takes a click to run the shadow analysis in cove.tool, users need to first model the surrounding buildings and then set up the shadow diagram manually which takes about an hour in another typically used tool.

Radiation Analysis - The radiation analysis is critical for optimizing solar power and specifying high-performance glazing products. It also provides insight for optimal positioning of outdoor seating spaces or naturally radiant heating or cooling for winter and summer months. cove.tool radiation analysis takes typically under 5 minutes while the same analysis with another typically used tool takes between 8 to 10 hours.

Façade Analysis - Façade Guidance Tool allows users to rapidly prototype shading configurations for each orientation without requiring it to be modeled in a 3rd party platform, first. This feature is an extra in cove.tool and is not usually attached to other Building Performance Simulation tools. However, the analysis can be done using another software with each iteration taking about 30 minutes.

Instead of manually calculating the amount of water consumption, this feature calculates the building design's Interior WUI (Water Use Intensity), Irrigation (Outdoor) Water Use, Storm Water Management, Cooling Tower Water Use, and water-related LEED Points based on user-defined Occupation Density, Schedules, and LEED v4 Reference Guide data. It then clearly illustrates all this information through bar charts and donut charts. Note that cove.tool helps with a preliminary study while a more detailed tracking tool is required for compliance. 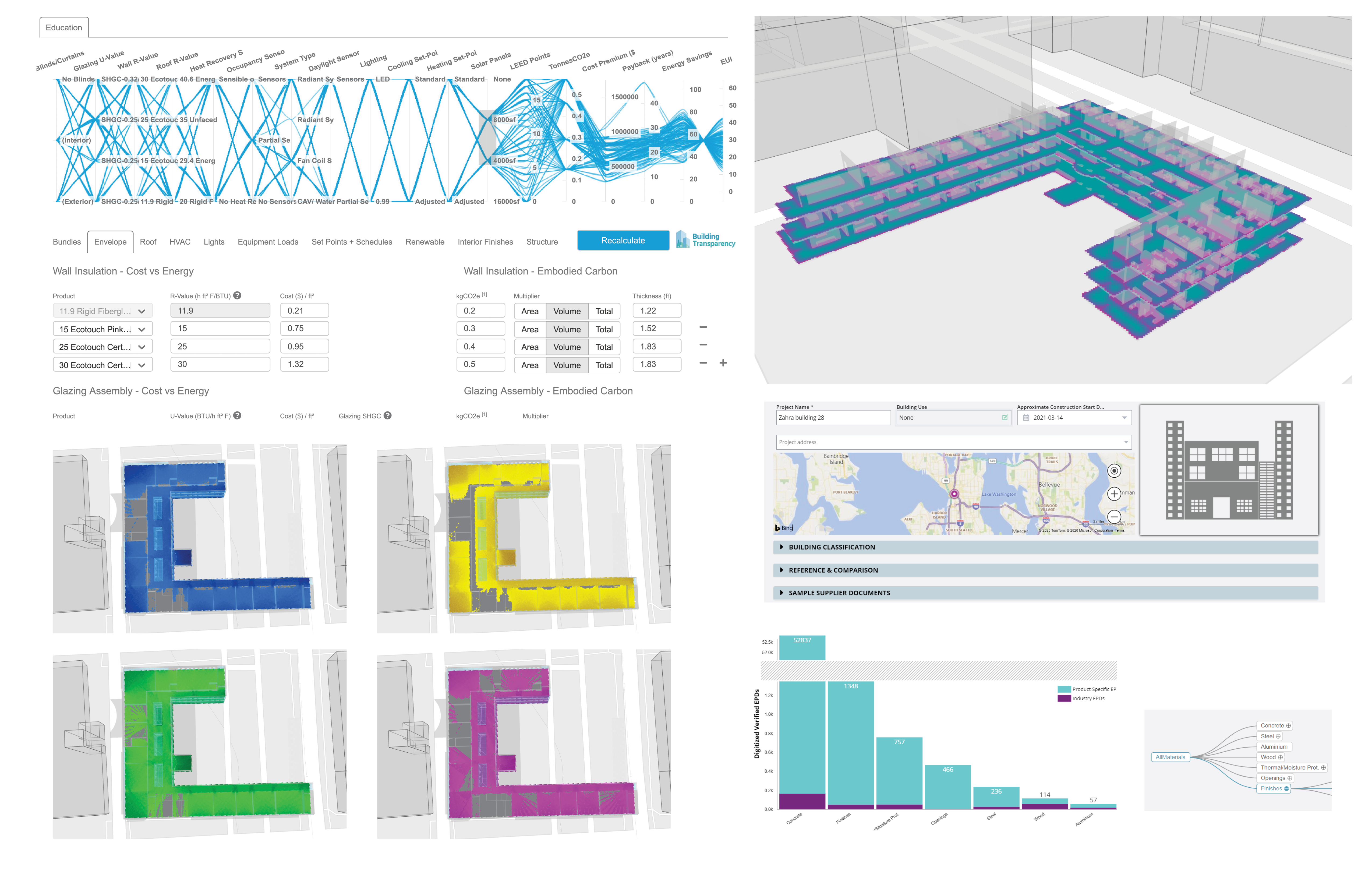 One of the most time-saving features of cove.tool is its optimization and bundles feature. With a unique algorithm, cove.tool parametrically runs hundreds of full building simulations instantaneously while factoring in costs and savings. This feature can explore every design combination and helps to save energy, material, and money with the aid of a data-driven approach. Compared to another typical optimization tool (In which it takes between 20-30 minutes to calculate each design iterations), cove.tool is much faster due to its use of Cloud Computing + Hosting. The use of Artificial Intelligence (Machine Learning and Automation) is another factor that expedites cove.tool’s processing and calculation of different design iterations.

One of the very unique features of cove.tool is its ability to assist architects in achieving LEED goals. cove.tool helps users to save a significant amount of time while pursuing the following LEED credits:

cove.tool runs a grid-based analysis on the floor areas of buildings to provide recommendations for the maximum number of building occupants and the percentage of floor area in which a building occupant can safely practice social distancing. The COVID score is accompanied by a heatmap visualization that shows the risky and safer locations within a layout and allows users to save time identifying if the proposed design can maintain occupants' health. This feature is not currently available in other tools.

cove.tool provides manufacturer products with both cost and performance data to help automate the optimization of building design and product specification. Embodied carbon values to automate the analysis of design decisions are built into the platform automatically for some of the building products including wall insulation, glazing assembly, blinds/curtain shades, roof insulation, and skylights assembly. The product database in cove.tool is constantly being improved and is provided through different sources such as EC3 directory and manufacturers.

By summing up the numbers in each analysis category, we see that going through a complete performance vs cost analysis takes about less than 1.5 hours in cove.tool and about 70 hours in alternative tools. Therefore, cove.tool can save more than 68 hours which equals to $13,600 saving in cost if we consider a charge of $200 per hour, the typical consultant fee. Note that the time-saving proposed above does not include the amount of time that can be saved with cove.tool during the premium studies process.