What is Stack Effect? Building Physics,

What is Stack Effect?

Stack Effect is the the vertical motion of air through a building caused by differences in temperature. Most prominent in tall buildings Stack Effect results in negative pressure zones, pulling in unconditioned air i.e. infiltration. This extra infiltration can introduce a large heating or cooling loads which the HVAC must consume energy to address.

How does Stack Effect work? 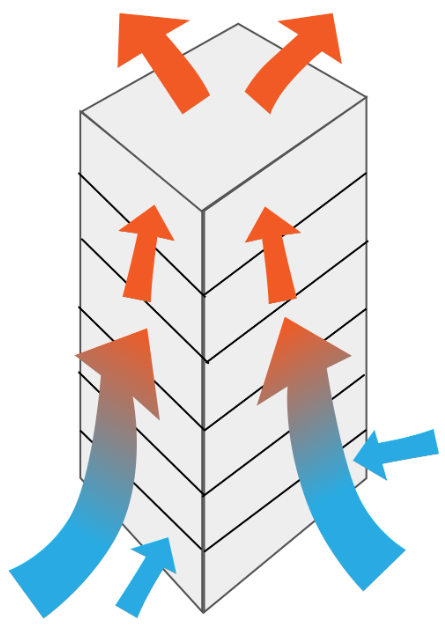 In both instances the additional unconditioned air can cause problems for comfort, IAQ, and performance for the HVAC system. In some extreme cases Stack Effect can cause doors at the base of buildings to either not shut or be difficult to open due to the pressure.

Energy Models simulate for the outdoor environment around the building in many ways, starting with the weather file. Some simulation engines account for other aspects of the environment like neighboring structures, local heat island, or stack effect caused by the model height.

The ISO Standard engine used for the Baseline Energy model accounts for both neighboring structures and stack effect. By including the stack effect calculation automatically, the platform produces detailed and accurate results without modeler intervention.