Infiltration is outdoor airflow into a building through unintentional openings, such as cracks, and exterior entry or exit doors. Infiltration impacts the indoor air quality (IAQ) and energy use of a building by introducing unconditioned and unfiltered air. Many global standards, such as Passive House, seek to reduce infiltration in buildings to reduce energy use and increase IAQ.

Many factors contribute to infiltration such as air tightness of the envelope, wind, stack effect, and building pressurization. Reducing infiltration is a team effort that requires coordination from concept through to the construction and commissioning of projects.

cove.tool accounts for infiltration as a flow rate per envelope area. Common units for this are cfm/sf and cubic meter/h per square meter.

cove.tool uses EN 15242 Ventilation for buildings - Calculations methods for determination of air flow rates in buildings including infiltration as the methodology to calculate the impact of infiltration on building energy. Typical infiltration rates from EN 15242 Annex B Table B.1 for a pressure difference of 4 Pa are presented in this table. 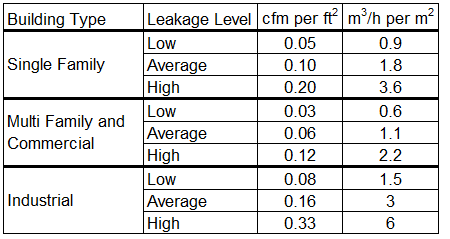 The automated values of infiltration are loaded in cove.tool based on calibration with respective Pacific Northwest National Laboratory (PNNL) building prototypes. In rare cases, where the building envelope is really tight, the infiltration rate may vary from 0.1 to 0.6 m3/h per m2. Also, the positively pressured buildings will typically have some infiltration associated with it, so a 0.1 - 0.3 m3/h per m2 value would be a fair assumption.

The infiltration input is located on the Baseline page, under the Building Systems tab. 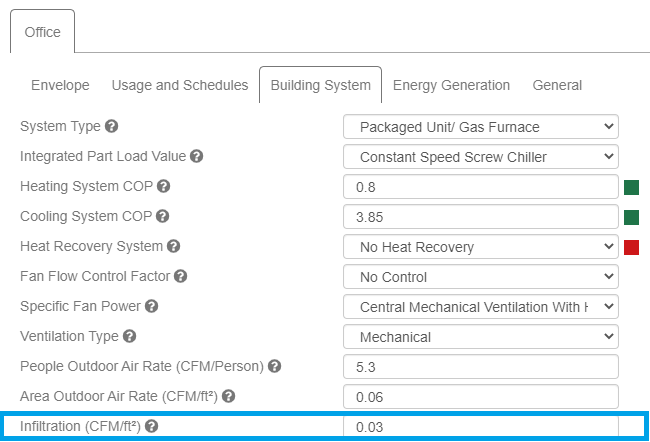 The 0.65 exponent is a typical value for all buildings, however, if you have fan pressurization test data you can use your building's specific value. For a more detailed example of this conversion see this UnmetHours post.

Impact of Stack Effect on Infiltration

The Stack Effect can have a large impact on the total infiltration of a project. In cold climates, this can lead to increased heating energy consumption. The platform automatically determines the additional infiltration based on the climate and height of the building.

The simulation engine follows the EN Standard 15242 methodology for the stack effect calculations. If for a specific project, the stack effect should not be included, this can be accomplished by setting the building height to 6ft or 2m.