EnergyPlus is the whole building energy simulation engine used by loadmodeling.tool. Several methods, routines and features of the platform help to ensure models run successfully every time. When simulations do not, warnings are provided by the engine to help us modify the model and produce a successful run.

When a model runs into issues, warnings direct from EnergyPlus will be reported to the EnergyPlus Warnings panel on the Results Page. Two types of warnings are reported: Severe and Fatal.

Severe warnings are displayed in orange and typically the warnings that taken together produce the fatal simulation. These will have details on the specific components in the model that need to be modified

Fatal warnings are displayed in bold orange and point toward the most important warnings that caused a simulation failure. Occasionally EnergyPlus can overcome some of the severe warnings, and this fatal warning denotes issues EnergyPlus was not able to overcome. 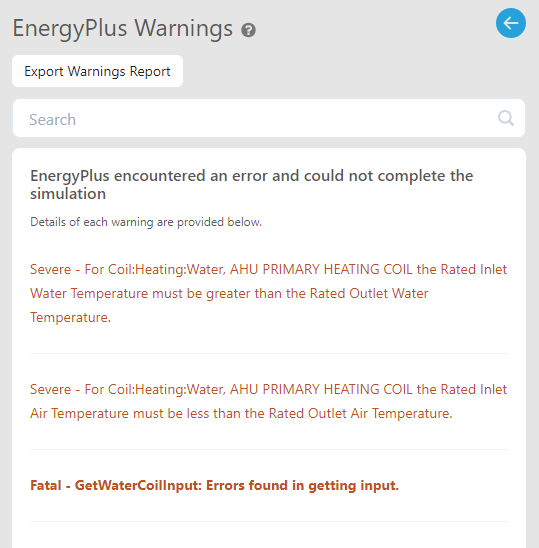 The full warning report from EnergyPlus can also be downloaded via the Export Warnings Report button. The exported file will be called eplusout.err and can be opened with any text editor such as Notepad or TextEdit.

Here is a list of warnings and steps to resolve on the platform.

EnergyPlus also provides in depth information on these messages in the official Tips and Tricks Using EnergyPlus guide. Chapter 14 includes a series of examples warnings along with suggested resolutions.