All Collections
Input Descriptions
Energy Codes
What is TEDI?

TEDI is formulated as the summation of space and ventilation heating output divided by modeled floor area. TEDI is reported in kWH/m2/year. Only the state of British Columbia in Canada formally utilizes TEDI to improve building envelope performance, however it is a useful metric in any heating dominated climate. In the platform TEDI is provided for any project in Canada.

Location of the TEDI output on the Baseline page. 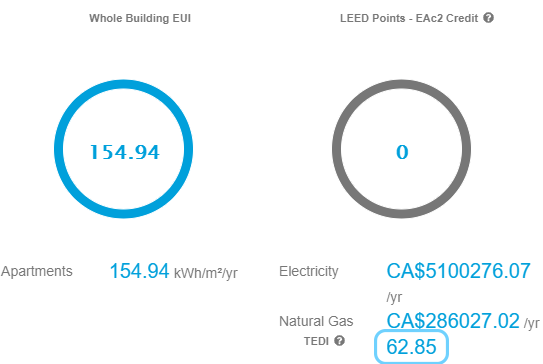 What impacts the TEDI value?

Only the following inputs on the Building Systems tab have an impact on the TEDI as they impact the heating demand before efficiencies are applied.

What does not impact the TEDI value?

Why consider TEDI at all?

As apposed to EUI, TEDI only considers the design aspects that limited the overall demand for heating in a building. By targeting low TEDI, designers focus on passive solutions like good insulation, air tightness and beneficial sun angles that help reduce energy use directly. Looking at these passive design aspects are always the first step in high performance design.