Building Type is a factor used in energy modeling software to differentiate commercial buildings into categories of buildings whose uses share similar energy usage data. Commercial buildings include all buildings which have less than half their floor space dedicated to residential, industrial, or agricultural uses. CBECS (Commercial Buildings Energy Consumption Survey) is the governing surveyor which collects the data and creates the building type categories, such as stores, restaurants, warehouses, and office buildings, as well as building types not traditionally considered commercial, such as schools, hospitals, and buildings of religious worship.

Building Type is important to know for two reasons. First, the practical knowledge of knowing one's building use type is to recognize the particularities of your building type's specific energy consumption and expenditure, as well as the component efficiencies and control strategies. For example offices, schools, and religious spaces have vastly different schedules. An office will consume energy daily, usually during the hours of 7 am-5 pm. A school will similarly, consume energy during the same time, but has month-to-month operation differences because of it's semester and seasonal-break calendar, such as a 3 month of summer where a school would use a fraction of its typical peak operational hours. A religious space, on the other hand, may have the most irregular daily schedule and will only have one day a week where it at peak use. Thus when running an energy simulation one must understand the different circumstances of each use-type and how they require different amounts of energy to consume at different rates and create standards for which designers and engineers should accommodate for the loads.

The second reason to know one's building type is to compare one's own building against the CBECS 2003 data set. In 2006, Arch2030 initiated the 2030 challenge, which led to a zero-emissions movement in the global building sector and has since been adopted by architectural design firms, states, cities, counties, the American Institute of Architects (AIA), the International Union of Architects, US Conference of Mayors, and the China Accord. Arch2030 created a framework with simple metrics and a standardized reporting format to track progress and help teams and organizations meet the 2030 Challenge. Energy modelers have also been using the metrics agreed upon during the 2030 Challenge to understand one's position in the movement towards making buildings of higher building performance. These metrics which source CBECS 2003 data set are the industry benchmarks and how we are able to determine industry growth. By creating a code that is not static, but ever-evolving, we can guarantee the energy movement progresses annually. Each building type in the CBECS 2003 dataset set's the benchmarks for which their energy use, cooling and heating load, etc. are the criteria to meet and exceed. See what building types are available inside cove.tool in this article and image below. 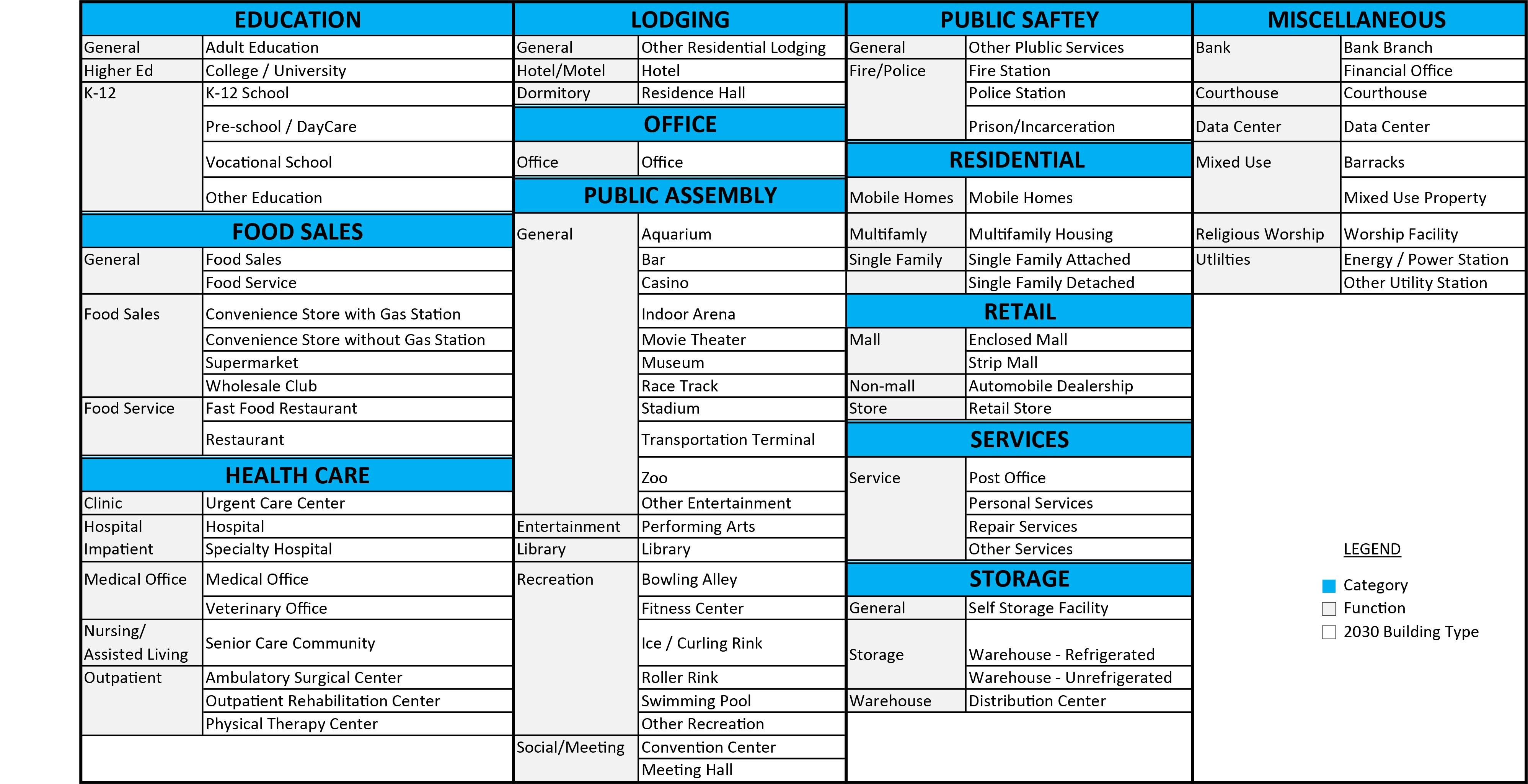 Pro Tip:  cove.tool currently has 8 automated building types and will continue adding custom building types as they are requested by our users. Also cove.tool uses AIA's zerotool which allows our users to directly report their project energy reports to Arch2030 2030 Challenge Database.