All Collections
Building Science Insight
Validating cove.tool
How is your glass impacting your energy performance?

How is your glass impacting your energy performance?

The openings in the building envelope that are covered with a transparent surface are known as glazing. Glazing is an essential aspect of structures as it helps to get in the daylight and solar heat into the designed space. Common types of glazing that are used in architectural applications include clear and tinted float glass, tempered glass, and laminated glass as well as a variety of coated glasses, all of which can be glazed singly or as double, or even triple, glazing units.

Thermal conductance is defined as the measure of the ability of a material to transfer the heat per unit time through the unit area of the material. U-value quantifies the rate of heat flow due to conduction, convection, and radiation caused by the temperature difference between the maintained space and outside environment. The unit of U-value in IP system is BTU/hr.ft2.°F and in SI system is Watts/m2.K.

The range for U-values generally varies from 0.2 to 1.3 in IP systems where the lower value is considered superior as it indicates the limited loss of heat from the space. The R-Value indicates the resistance to the heat transfer and can be simply calculated by taking the reciprocal of U-value.

In the hot/warm climate (ASHRAE climate zones 1,2,3 and 4), the Solar Heat Gain Coefficient (SHGC) has precedence over U-value as the heat coming in is considerably higher than the heat transferred out of the space. On the other hand, the cold climates (ASHRAE climate zones 5,6,7 and 8) benefit from having a lower U-Value for windows as it is really important to retain the heat inside the maintained space 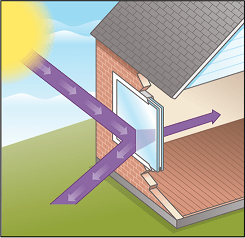 As the Visible Transmittance value increases the amount of daylight into the space also increases. In hot/warm climate zones (ASHRAE 1,2,3 and 4), the VT value should be chosen considering the fact that the higher VT value leads to glare and overheating of the space. And for the cold climates (ASHRAE

Zones 5,6,7 and 8), the higher values for VT are desired as it will help to reduce the heating load of the system. 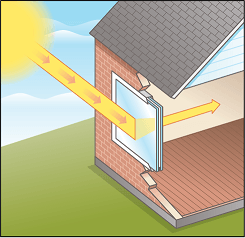 It is important to consider that air leakage affects indoor air quality as it introduces pollutants, dirt, and microbes to the building. Therefore, the minimum value for air leakage is highly desired. Air Leakage (AL) is an optional rating and sometimes the manufacturers may decide not to show it on their product labels. 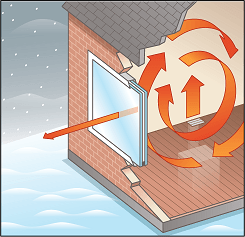 The Solar Heat Gain Coefficient (SHGC) is the fraction of the total incident sunlight that is being transmitted through the glazing material. SHGC is a dimensionless number that ranges between 0 and

Typical values for glazing SHGC vary from 0.2 to 0.9 depending upon the type of glass used, tinting, coating type, number of panes, etc. For the hot/warm climate zones (ASHRAE zones 1,2,3 and 4), selecting higher SHGC for glazing results in higher cooling loads for the building. Therefore, a low SHGC value typically less than 0.4 is desired for hot climate zones (where cooling loads are significantly higher).

For the cold climate zones (ASHRAE zones 5,6,7 and 8), the higher SHGC values for glazing are preferred as they permit more solar heat into the space. Integrating this passive solar heating strategy helps to reduce the heating loads for the overall system. 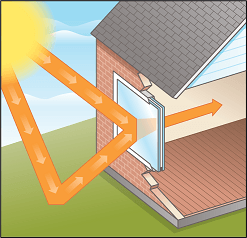 relative to the 1/8-inches thick single clear glass. The shading coefficient is an indicator of how well the glass is thermally shading the interior where there is direct sunlight on the glazing area. Shading Coefficient value is a dimensionless number whose value varies between 0 and 1.

The main difference between Shading Coefficient (SC) and Solar Heat Gain Coefficient (SHGC) is that the SC is based only upon the glass portion of the glazing assembly which means it does not consider the frame heat flow.

For the hot/warm climate zones (ASHRAE zones 1,2,3 and 4), the lower values of the shading coefficient is preferred for the glazing as it helps to reduce the cooling load of the building. And for the cold climate zones (ASHRAE zones 5,6,7 and 8), the higher values of the Shading Coefficient are preferred because it helps to passively heat up the space reducing the heating load of the system.