Glazing Area: the facade glazing area facing each direction (not including wall area). This will be populated automatically if a geometry plugin is used, or can manually be edited to complete the geometry profile. Read more about geometry glazing requirements here.

Glazing U-Value: This measures how effective your glazing assembly is as an insulator. A lower U-value means higher insulation which ultimately leads to energy savings.

Windows with higher SHGC ratings will have higher U-ratings as well, meaning people who are looking to enjoy some natural heating will have to do so at the expense of insulation value.

Since there are different types of material assemblies for glazing which would affect what value would be used to determine the automated value, cove.tool makes that assumption for the users based on Pacific Northwest National Laboratory (PNNL) building prototypes. This may differ based on your project size and use type, and cove.tool can help better determine which is best for your project's overall performance. Glazing U-value and SHGC will be applied to the entire project if you have more than one type using an area-weighted average method to calculate a single value. Also cove.tool assumes this input includes both the glazing panel and frame, not just performance properties at the center of glass (COG U-value). If you need assistance calculating the effective r-value for your unique assembly, try out this open-source online tool.

The following is a table except for the prescribed assembly max. U-values and SHGC from ASHRAE 90.1-2016 for climate zone 3. Note, the term Assembly includes framing, glass, and spacer components.

1. My glazing product spec sheet has many u-values listed, which should I be using?

cove.tool's simplified energy analysis requires the U-value for the overall fenestration area (including framing) in accordance with NFRC (National Fenestration Rating Council). This assembly U-Value is typically listed in a product spec sheet but may be broken into columns based on air gap and winter/summer seasons. If a preference is not known, use the average of the available u-values (examples below). 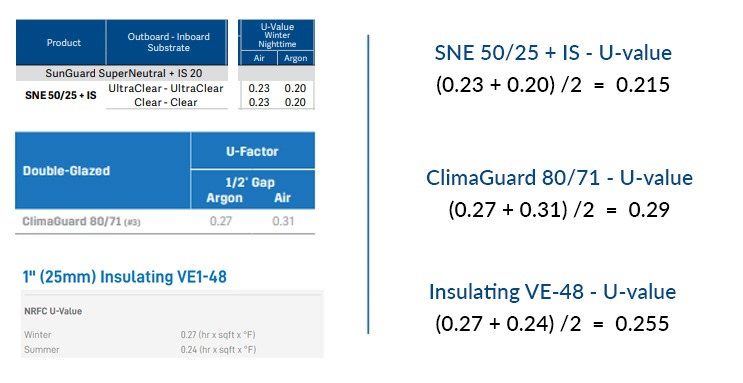 Some manufacturers don't outright publish assembly U-values and instead publish Center-Of-Glass (COG) U-values and Frame U-values separately, requiring design teams to calculate their own Glazing Assembly U-value (via the area-weighted-average method) or request a quote in order to get the whole assembly value. Other includes the Edge-Of-Glass (EOG) U-value, which is the least common type as it is more so used for detailed research, and not required for most compliance models like LEED v4.0 - EA credits. Last, BEM tools like EnergyPlus do allow users to enter in both COG and Frame values separately, but this is more so a preference of the tool rather than a requirement of any standard. 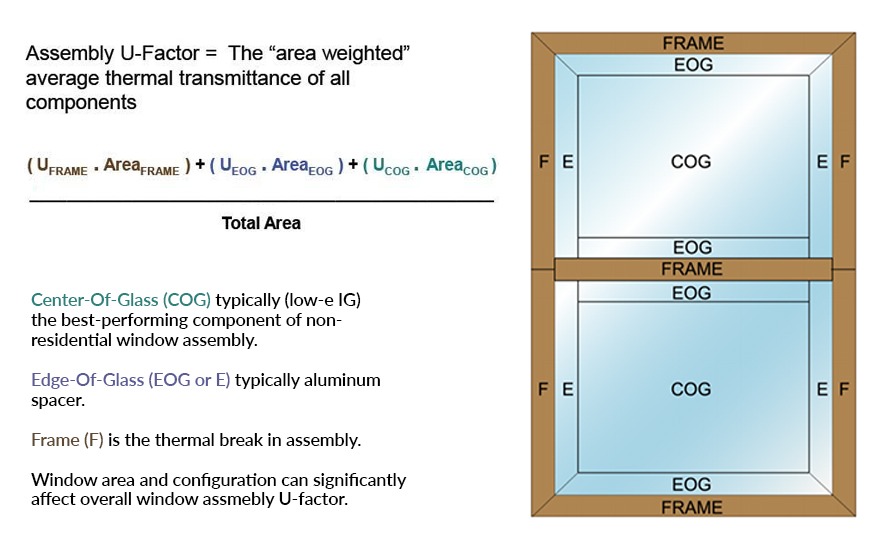 2. Where is the Glazing Shading Co-efficient input?
Shading Coefficient (SC) is an older method to calculate glazing heat gain which was replaced by SHGC. Therefore users won't find this input listed under the envelope options. For those who need a refresher, the Shading Coefficient describes the ability of a window or shading device to transmit solar heat. The window shading coefficient of windows, blinds, or shades is directly proportional to the solar heat of the shade it transmits. The shading coefficient is expressed as a number between 0 and 1. The lower the window shading coefficient, the less solar heat it transmits and the greater the shading ability it has. A window covering that reduces heat by 75% has a shading factor of 0.25.

Users who only have shading coefficient values but need SHGC for cove.tool, can use this equation to convert. 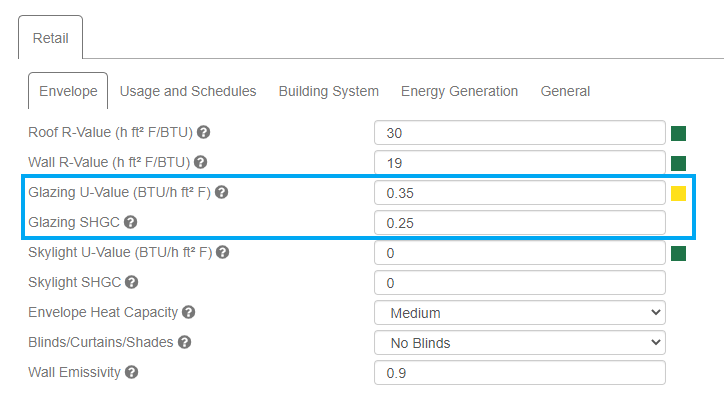