A descriptive overview of Radiation analysis, what the diagram means, and how to leverage cove.tool for design insights.

Written by Jonathan Essary
Updated over a week ago

Along with daylight, glare, and shadow 3D visualizations, we have added a radiation analysis for your building's envelope.

What is the Radiation Analysis in cove.tool?

To understand how cove.tool defines and calculates radiation, you'll first need to know these 3 terms:

Rather than continuing the tradition of past radiation analysis simulations that displays surface radiation in kwh/m2, cove.tool uses a more intuitive legend that interprets the radiation potential of each surface as a percentage of the maximum GHI value.

This analysis type is used to evaluate the high-or-low radiation potential of each facade and envelope element. Shading devices & interior walls are omitted from the radiation visualization to better see the results.

Using the site's weather file, cove.tool calculates maximum GHI for a perfectly horizontal surface (100% Radiation Potential). As each building surface skews from the prefect horizontal surface, the GHI performance of each grid point drops. Using the difference between the maximum site GHI and the surface objects GHI, cove.tool calculates the % Radiation Potential. Also note, radiation is critically impacted by location, orientation, and context it is important to have an accurate 3D environment in cove.tool. All environmental factors will also impact the GHI of every surface object. If any changes to the site or context are needed, please follow the tutorial in the Navigating 3D Mode article to do so. Once the scene is set, cove.tool calculates the %RP of each grid point then associates a color gradient to each surface to show the diffusion of radiation along with the envelope. The result is a gradient heat map of the building envelope with areas of lower exposure colored purple and areas of higher exposure colored gold. 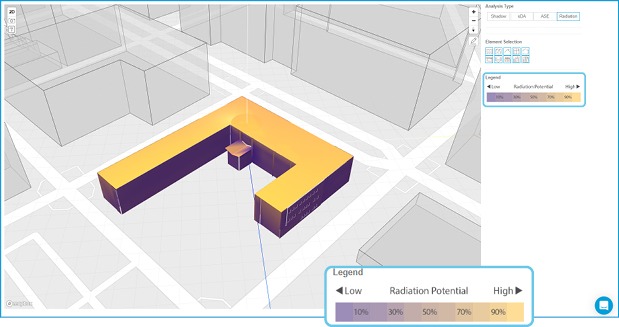 In older radiation studies, building envelopes have been wrapped in a Radiation or GHI heatmap (below left & center). The studies colored each surface by their kWH/m2 performance, it is difficult to understand the intensity of each study. converting the analysis to a Radiation Percentage (right) presents more clearly the impact of the sun on your project.

Users can also generate their site's radiation skydome using the climate analysis report in cove.tool. The two radiation studies are helpful in the early stages as the massing is still being explored to anticipate the radiation potential of each facade. Be sure to use the help diagrams to interpret these diagrams.

Key takeaways of a Radiation Analysis

This overview covers why radiation studies matter for designers, and how accurate design insights can be extracted.

Radiation can mean different things so it's important to be specific. Some insights might seem logical at first, but can be misleading if they are discussed as rules of thumb rather than running the simulation. Your climate will be the most important factor when determining whether high or low radiation would be beneficial for your building design. 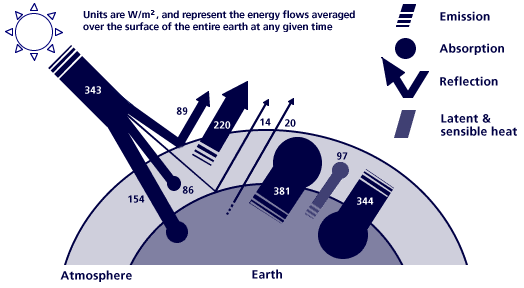 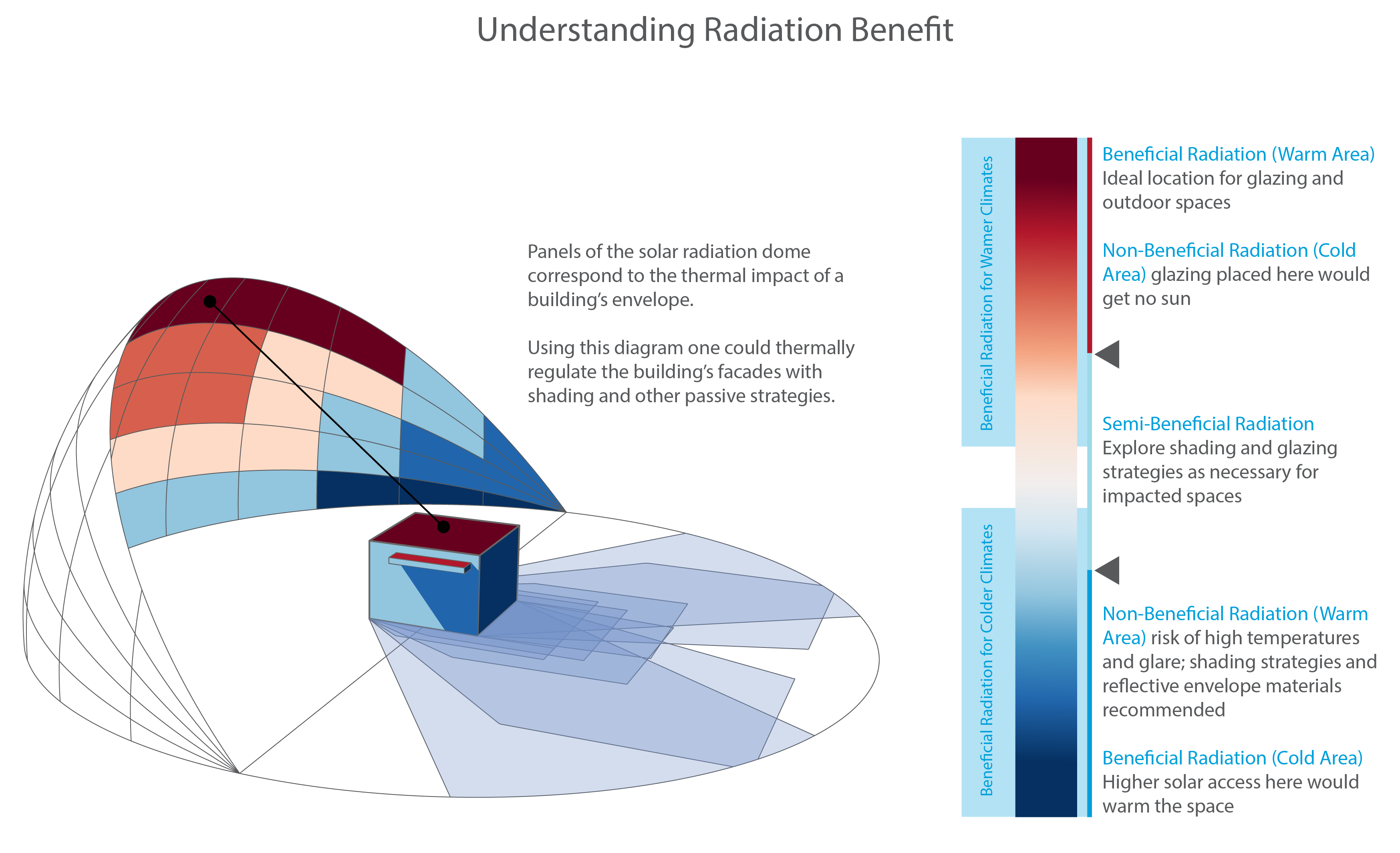 Solar exposure is different throughout the world and differs greatly between the northern and southern hemispheres. In the AEC industry, solar irradiance has various applications like predicting energy generation of photovoltaic systems and the impact on heating and cooling loads of buildings at specific locations on Earth. There are also various types of irradiance that can be calculated. You can find out more of the science here, or more detailed information of regionally specific irradiance from NREL here.

Heatmap of annual GHI Solar Irradiance for the North American continent, by NREL. 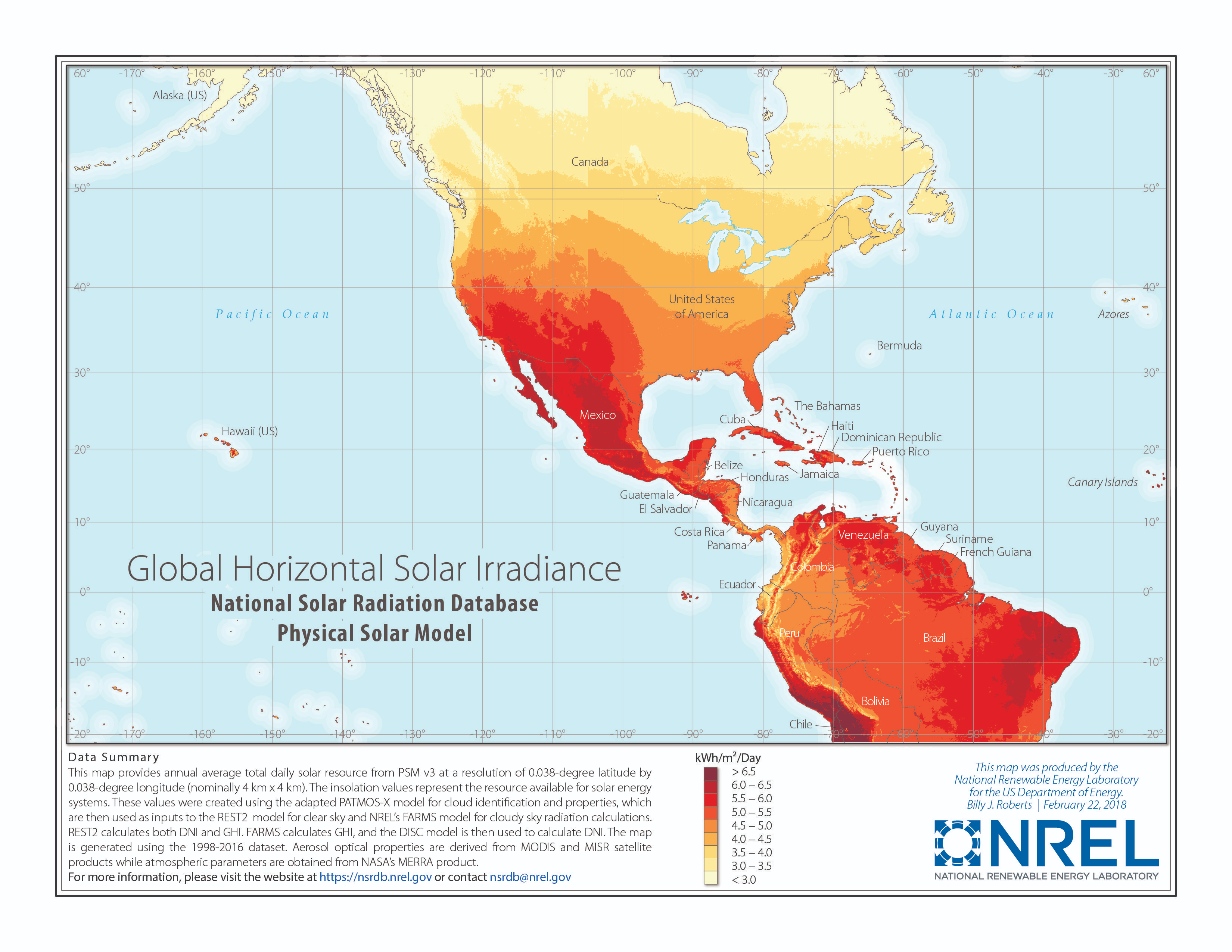 1. Will it tell me to change their insulation depth?

Long answer: This is a common misinterpreted assumption. The heat entering the building through glass is much more critical to building energy when it comes to radiation. When a surface is hit with sunlight only a fraction of the heat will absorb, where the majority of the sunlight entering through glass will heat up the building if not blocked. You need solar heat for winter heating and too much insulation can be bad.

Short answer: Depends on the intended use. Heat gain can be beneficial or bad. Read this article>>https://en.wikipedia.org/wiki/Solar_power

3. What do I need to generate a Radiation Study?

A model imported through one of cove.tool geometry plugins, and building site (street address or longitude/latitude coordinates). Once you reach the Daylight Page (sun icon), the several 3D visualizations will initiate. Each analysis type will run in parallel but take different calculation times to complete. The radiation analysis will take the longest to complete, and therefore the button is grayed-out until complete.