How does shading impact design performance? 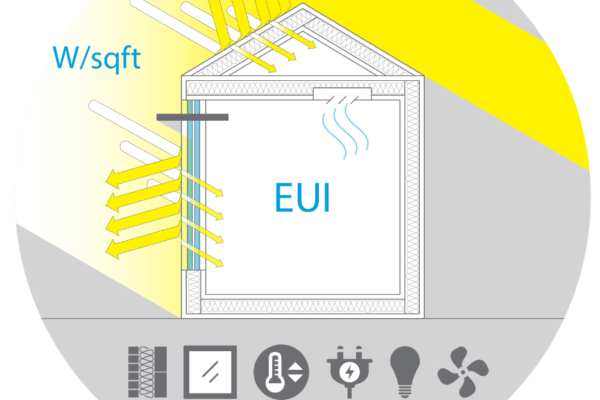 Q: The best way to quickly and most cost-effectively improve my building’s energy performance results is to add shading, right? – Anonymous Architect

A: Typically Not. – Underpaid Engineer

Solar Shading is a powerful passive strategy that if fully utilized can have a massive impact on your overall building’s performance. However, this is dependent on a multitude of factors including the amount of shading added and the program that are in the building. Some mis-equate a fine-tuned solar shading strategy applied throughout a project, to adding 6” fins on east and west facades. Solar shading encompasses a large scope of design strategies from Building Massing, Orientation, WWR (Window to Wall Ratio), Glazing Placement, Envelope Properties, Fenestration performance, and traditional shading elements (fins and overhangs, light shelves, shadow boxes, and cantilevers), modern shading elements (frit, interior shades, dynamic glass). So, it makes sense that picking one strategy out of the lot will not hold a candle to employing the entire package.

Additionally, some buildings are internally driven (which means, they have a high equipment load, lighting power load, ventilation rate) If you are working on a Lab or a Hospital project, the building will be internally load driven almost always. This means that the façade only contributes to 5% of the total energy use and adding some shades to the façade will have a very minor impact. In these cases, the shading device will be crucial for glare reduction, but not quite essential for energy reduction. ​ 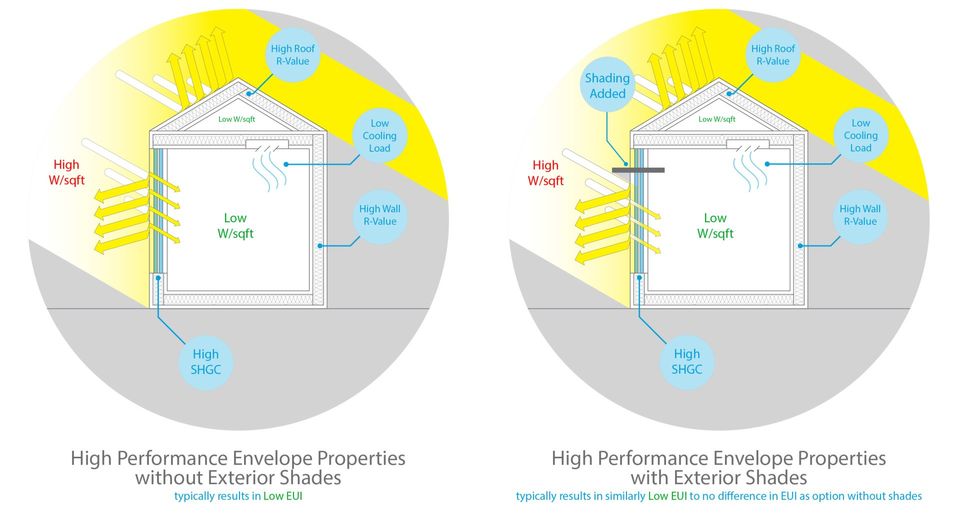 Another thing to keep in mind is that as our glazing type becomes more and more efficient, the shading has less and less impact on the overall EUI of a project. The easiest way to think about it is: Imagine you are going for a trip to New York in December and you have put on a warm coat to keep the cold out. Now, if in addition to this coat, you add another jacket on top, it might have some minimal benefit to keep the cold out but not as much as the original coat did. ​

The properties of the fenestration that will have the most impact on building loads and energy cost are SHGC and U-Value. The SHGC (Solar Heat Gain Coefficient) is the fraction of incident solar radiation admitted through a window, both directly transmitted, absorbed, and subsequently released inward. The U-value indicates the window’s insulation factor or rate of heat loss, the greater a window’s resistance to heat flow and the better its insulating properties.